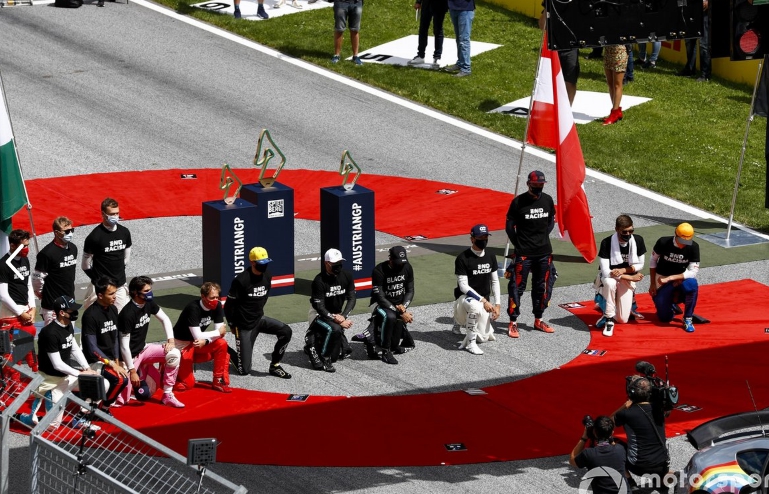 The show of support from the drivers in the fight for diversity continued this weekend at the GP of Styria.

As happened at the Austrian Grand Prix , the first date of the 2020 Formula 1 season , the top category drivers spoke out against racism in the ceremony before the start of the Styrian GP.

Before the hymn ceremony, the riders once again lined up in the finish line area, with Lewis Hamilton wearing a black shirt with the legend Black Lives Matter , just like in the first competition. The rest used the same garment, but with the phrase “End racism.”

The scene of several pilots placing one knee on the floor, a symbol in the fight against racism, was repeated, with exactly the same pilots kneeling.

In addition, members of Mercedes made the same gesture to demonstrate the sympathy of the movement not only between the pilots, but also in the paddock.

During the past days, Hamilton explained that he did not force anyone during the first race to kneel, this despite the rumors that arose on the subject.

“There is a story, at least one that is really wrong. I never asked or demanded of anyone to kneel, I never even mentioned it. It was something raised by Formula 1 and the GPDA ” .

“When we did the pilot briefing, Sebastian (Vettel) and Grosjean mentioned it and asked the pilots if they agreed. There were several who said they would not.”

“I let everyone say what they wanted and then I went to them: ‘Boys, so you know, I will, but you do what you think is right.’ Now I am very, very grateful for those who knelt beside me. ”

“I think it continues to be a very powerful message. Ultimately, if you kneel or not, that is not going to change the world. “